The decision can be very tricky when you have to choose between two saws because of budget or other restraints. If you’re choosing either a scroll saw or a band saw, we can completely understand your confusion because of both these saws are commendable and must haves.

Both of these models have their own selling points but they also have weaknesses that need to be pondered upon. If you are planning on making a solid investment and need to pick one of them, you must ensure to do consider all the aspects of these saws before the shopping spree begins.

So, we took it upon ourselves and thought to enlist down all the things you must know about a band saw and a scroll saw. 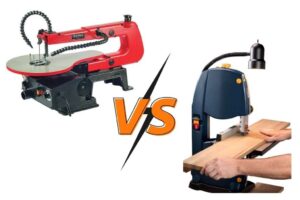 A scroll saw resembles a sewing machine a lot. The blade on the saw is positioned in a way that it moves up and down while cutting. It really helps a lot when the DIYer has to make precise cuts. You can easily maneuver your sheet in the direction you’d like it to cut which ensures you get a very accurate and efficient rip of the entire sheet.

The most prominent thing that a user can do with a scroll saw is make precise and very intricate cuts. It provides a very fine edge to your project and enhances the overall look of your product as well. If you happen to be someone who wants to create a very intricate sign with very precise and detailed cuts, scroll saw has got you covered.

As far as the functionality of the scroll saw is concerned, you can see that it works just like a sewing machine. You will have to move your material across the saw to make your required pattern. You will find various other types of scroll saws in the market and you can go with the one that fulfills your requirements. However, the blades on the scroll saws aren’t that powerful and they are prone to damage as compared to the band saw.

With the help of a scroll saw you will be able to make angled, straight and round cuts. However, the most intricate and advantageous cut that it creates is in the center of your project. Most of the saws available in the market cannot cut your work piece from the middle but scroll saw can that too quite efficiently!

Scroll saws are also safe to use. It might not be as powerful as other models in the market but with a foot pedal, the saw gives you enough time to think about the cuts you’re creating and make a fine piece out of it.

So, this is everything you needed to know about a scroll saw. Let’s talk about band saw before we make the final comparison.

A band saw is very different from a scroll saw and it is mainly used for much extreme cuts. The overall functionality of this saw is also very different and the fact that it is huge in size just sets everything apart.

The entire cutting mechanism of band saw is very different than that of a scroll saw. The blade of the band saw will rotate on the board and not move up and down like it did on the scroll saw. This saw is quite versatile and it can be used for getting done various tasks in very efficient ways.

Band saws are usually used to make cuts on woods and a few of other materials. It works efficiently well when making angled or straight cuts while it also fine tunes round edges. It is quite large in size and very rough in functionality so the cuts you obtain from band saw are not that neat and will need you to put some extra effort on it when your product is done.

A band saw’s blade is quite powerful and not prone to damage. It is very fast at ripping sheets apart but since they are more raw and powerful, the cuts that you get out of this saw isn’t that fine as compared to the ones you get from scroll saw. With a band saw, you won’t be able to make quick turns but it can rip through a thicker wood that a scroll saw would never be able to accommodate.

A band saw is mostly used by furnishers. They make it very easy to cut down wood and you can easily carve out furniture from it.

A band saw is capable of creating angled, round and straight cuts. Since it is far more powerful than a scroll saw, you can easily rip through larger pieces of plywood with the help of this saw. However, it will not allow you to make carvings between the middle of a sheet like scroll saw did.

Band saws are pretty dangerous to use because they have a lot of power. However, by follow all the standard operating procedures, you will be able to stay safe when creating your projects.

What are the Uses of Band Saw?

As you can see band saw and scroll saw both of their own advantages. Scroll saws are good for making beautiful and intricate work pieces while band saws can accommodate you if you are making furniture. Both of their own plus points and weaknesses so it basically completely depends on your that what you need a saw for.

If you’re a DIYer who loves creating small projects for his/her home, then scroll saw is going to be your best buddy but if you work professionally and make bigger projects such as make furniture, go for a band saw. 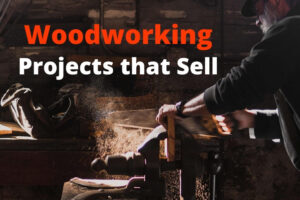 Miter Saw Vs Table Saw – Everything You Must Know! 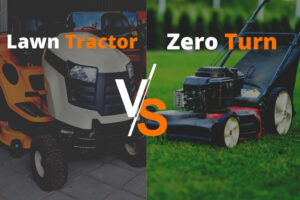